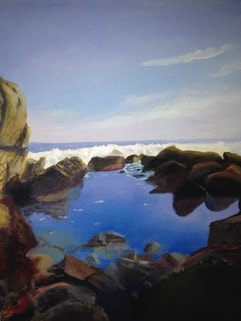 "I was born and raised here on the Monterey Peninsula. My grandfather came to Monterey after searching for his mother in the aftermath of the San Francisco earthquake in 1906. He settled in Monterey and worked in the canneries for E.B. Gross and Booth Cannery. He raised his family at 321 Wave Street (now Cannery Row) and later bought his first home at 786 Wave. All of the family worked in the canneries until World War II, when the three oldest brothers joined the Navy. I have many happy memories of spending time at my grandparents' house. The train track was in between the back yard and Cannery Row. We waved at the conductors from the kitchen window, and they always gave us a special 'toot.'

"I paint with oils, attempting to capture the beauty and the moment here on the Monterey Peninsula."
​ --Karen Mahaney Low