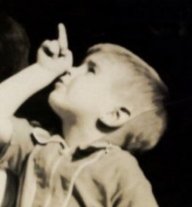 ​Born at a very early age (but approximately on time) in Baton Rouge, Louisiana, under the EXXON Sign, I first saw the humor in life when my Dear Mother named me after my not-so-great great grandfather, Notlim Jines. Grandpa Notlim was a petty horse thief (he stole only Shetland ponies) and was always looking backwards over his shoulder, so she decided to reverse Notlim to Milton (sigh).

While still just a tyke, my Dear Mother gave me pencil and paper to keep me quiet during Sunday Church services. She really expected a best-selling novel, but there was a war going on (you know, the one "to end all wars") so there was ample opportunity for me to divert to caricaturing. Endless hours, pencils, and erasers were spent drawing caricature sketches of Hitler, Mussolini, and Tojo ... you name it!

This affliction to draw everything in sight followed me everywhere, puberty through adolescence and with any luck, on into adulthood. Then it happened: I felt I was diagonally parked in a parallel universe and two-dimensional cartoons were simply not enough. I discovered the third dimension one day when I picked up a handful of mud and formed it into the likeness of my rather odd-looking art teacher (University of Southwest Louisiana, Lafayette). He was less than amused (and even less the art teacher) so, in the natural progression of things, I found a new career flying airplanes!

The next 45 years were spent breaking laws (gravity, the sound barrier, averages, and reason). Ultimately I was transformed into a retired Airline Captain, which I remain to this very day. Being deathly afraid of rocking chairs but obsessed with the creation of humor, I continue trying to convert mud and other gooey substances into things funny. I consider laughter a bonus or, as they say in my native Louisiana Creole, "lagniappe." The little added element of humor makes my ceramic cartoon creations "Four-Dimensional." The philosophy is simple; "Goofy is Good, and Weird is Worth it!" I plead Contemporary Insanity and if you don't laugh at my stuff, I'll have an art attack and destroy it.

Oh yeah, I have won awards, too few to mention here … just look at my creations and laugh with me, that's reward enough. The world needs more humor so do your part. I'm in the Tee! Hee! Witness Protection Program, so if you want to argue about all this or just say hello, go to the post office and talk to my picture. Or call me at my under-the-bridge (exclusive) location, (831) 625-5643 (Carmel-by-the-Gruff). I also have email. But whatever you do, don't call my cell phone. I'm in a meeting.